Zastrow is an extremely intelligent spymaster, strategist and tactician. He plays the Great Game with an uncommon skill.

Zastrow (“the shadow”) is the director for what was one of the main division of superhuman operatives in the DCU’s USSR – the Red Shadows.

These covert agents are deployed on a wide variety of operations. For a long time their field leader was Stalnoivolk. The Red Shadows have often clashed with Americans, such as Firestorm, the Flash or the Suicide Squad.

It is hypothesised the Red Shadows still serve the Russian government – although presumably with changes, such as several members going into the private sector. Known members have included the Blue Trinity, Mrs. Gradenko, Yerosha, Schrek, Lamia, and Stalnoivolk.

Zastrow is usually dressed in old-fashioned clothes – a suit with a tie, a fedora and, if appropriate, a raincoat.

He wears a pair of thick glasses hiding his eyes (à la mad scientist), and is a chain smoker.

Zastrow is a cold, calm, extremely intelligent chess master. He can design extremely intricate plans which successfully anticipate his opponent’s actions, or even have elements letting his opponents believe they have outmanoeuvred Zastrow, while in fact he has outmanoeuvred them by predicting their reaction.

He can also take snap decisions and go with the flow with the same level of accuracy.

He seems to be an authoritarian. He doesn’t really raise his voice, but he can obviously be tired quickly when his operatives are not smart and driven enough.

Zastrow does not do any supervillain antics – he plays the Great Game like a challenge of pure intellect.

“My intention was to turn her into a double agent. But another possibility presents itself.” 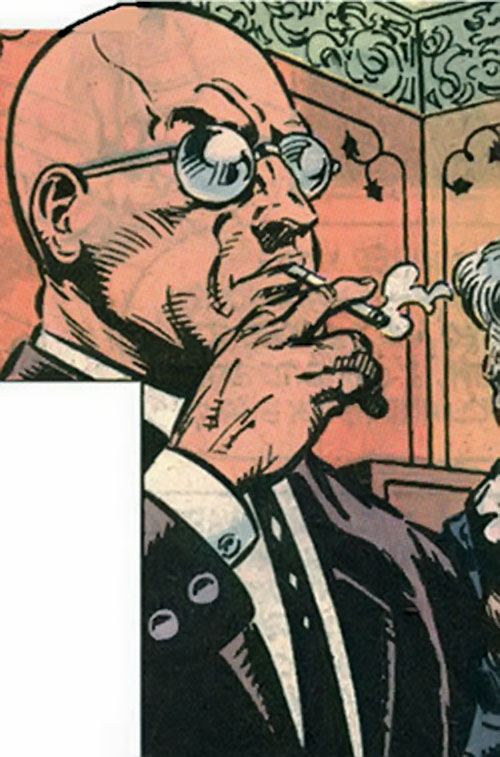