Zealot is a Kherubim lord, a race of aliens from the planet Khera. As such she is immortal and very hard to kill. Since her landing on Earth millennia ago, she spent her time developing her fighting and warring skills, making her one of the best warrior on Earth.

She also has very powerful latent psychic powers. However, after they were triggered, saving her and her teammates, she fought (and succeeded) to discard them. They were drawing her toward a godlike level she was unable to handle.

Millennia ago, at the end of Earth’s prehistory, two alien races at war (the Kherubim and the Daemonite) came to the vicinity of our planet. In the ensuing dogfight in near space, both starships crashed. The survivors of both crafts, after dispersing, carried on their eternal war on Earth’s ground.

To fuel Kherubim’s army’s ranks, Zealot founded a local branch of the Kheran order of mercenary women : the Coda Sisterhood. The first record of this corps appears to be in ancient Greece with the fall of the mythic city of Troy, but we can assume it existed long before that.

At this time Zealot was the Majestrix (i.e. ruler) of the Coda order. As she estimated that her fellow warrior sisters were becoming more butchery assassins only interested in money than warriors, she betrayed the order, defeating (but not killing) her teammate, Artemis.

In the process she gravely insulted Artemis’ honor as the Coda is taught to never show pity toward a fallen opponent. Since then, the Coda has placed a death warrant upon Zealot’s head.

It pretty much seems that every conflict in Earth’s history finds its roots in the Kherubim-Daemonite war. Zealot thus appeared on many theaters of operations worldwide.

Ironically, so far from their respective homeworlds, both parties on Earth were oblivious of the fact that the original war between them, the one that took place in the far reaches of space, had been over for millennia. But no one estimated that linking up with a handful of lost, remote combatants was worth the effort.

Zealot teamed with a former US Special Forces operative, and dragged him in her crusade. She instructed him on the secret ways of warfare according to Coda (further inducing the wrath of the rest of the Coda, and teaching men was taboo). The man was Cole Cash, aka the Grifter.

It is obvious that their business relation turned into a love affair at some point, but that backstory is never explained (though, both are obviously lovers).

Later, both of them joined the emerging team of superbeings, founded by Jacob Marlowe aka Lord Emp, another Kherubim lord. These are the WildCATS (for Covert Action Teams), as they were the only ones aware of the Daemonite menace and ready to counter the plot of the Daemonites group known as the Cabal.

During the course of their war with Daemonites (and other alien races), they often met Coda warriors fighting along the opposition. Those Coda systematically jeopardized their employer’s agenda to try to bring back Zealot’s head, which only resulted in their violent death.

Return to the homeworld

During the “WildStorm Rising” crossover, the WildCATS retrieved the Kherubim starship crashed on Earth millennia ago. The whole team (minus Grifter who resigned just before this story began) took off with the craft to prevent its apocalyptic explosion in Earth’s atmosphere. However the ship didn’t blow up, but warped back to its homeworld : Khera.

This homecoming episode revealed the truth about the Kherubim-Daemonite conflict and how Kheran had won it a long time ago. There, Emp and Zealot (as Kherubims of noble blood) were considered war heroes and leading figures of two opposing parties in the Kheran senate.

The other members of the team discovered that the Kheran society was a feudal – and arguably fascist – one. It was based on a caste system where Daemonite war refugees were treated like trash and parked in ghettos.

As Zealot and Emp were Kherubim nobles, they turned their back on their former friends and left them in their state of inferior citizenship. It went particularly ugly between Zealot and Voodoo, the first pushing her bad attitude in front of her Coda peers, the last being completely rejected by Kheran society as part Daemonite.

Return from the homeworld

Things escalated into full fight between the two. The other non-full-Kherubim WildCATs were dismayed, and Voodoo disgusted. It ended when Zealot’s political party attempted to bomb her out during a senate session, just to make a martyr out of her and lead Khera in another era of war. With the exposure of this plan, the WildCATS returned to Earth, but their morale was gone.

After the “Fire from Heaven” crossover, the spirit of her former Kherubim lover, Jan Colt, the one that served as model to the Hadrian’s type androids (aka Spartan), emerged out of the body of this episode’s chief villain. He took possession of Spartan and threw a lot of confusion in Zealot’s so far emotionless mind.

Unable to choose between Colt and Grifter, and after refusing to depart with them in a crusade across time, she decided to quit the WildCATs. She signed with Backlash’s emerging team : Wildcore, to fight the incoming D’rahn (another alien race).

Zealot is the typical, Jim Lee’s penciled, ultra babe. She always wears tight red outfits, revealing her sex goddess body. In battle, she has Coda war paints on her face consisting of three red bands on each cheek and a red dot on the middle of her forehead.

Her hair is either quite short or quite long. She usually fights with a pair of katanas and boomerang shaped throwing blades, but she is known to use any weaponry available (guns, heavy weaponry, alien weaponry, Coda clef blades…).

She is a warrior. She is tough, violent and ruthless. Millennia of Coda training makes her a deadly foe and forces her to never withdraw from battle.

Dedicated to the art of war, she never shows any emotion, be it love or even hatred (except for the original Kherubim-Daemoite racism). As a consequence, she feels very lonely, but will never let her at ease when she’s not alone. It doesn’t mean she has no feeling, she’s definitively in love with Cole Cash, she will just never let them surface.

An exception can be made for her sister, Savant, as she went to great extents to save her.

Zealot is arrogant, overconfident and elitist. She won’t line up or side with people she feels too inferior to her fighting abilities. The immersion in her former society just emphasized this, and was the main reason for the team disbanding.

Though she doesn’t feel good about what happened on Khera, she tries to put it aside, sharpens her bad attitude, and pick up a new war to fight after the Daemonite business sank.

According to several members of the list, there’s ample reason to see Zealot as a fascist and a Kherubim supremacist with hints of sociopathic and bloodthirsty behaviour (“Zealot” is not exactly what you call nice people, after all). But this author would rather assume the more positive point of view described above.

In the DCU, Zealot, a renegade Amazon, would be one of the leaders of the emerging new breed of superhumans described in Kingdom Come. Her past as an extraterrestrial war queen is obviously a psychotic delusion.

She was gravely wounded by the sword of Wonder Woman during the Gulag breakout, and presumably died in the nuclear blast. If she didn’t, she’s part of those being re-educated on Paradise Island. 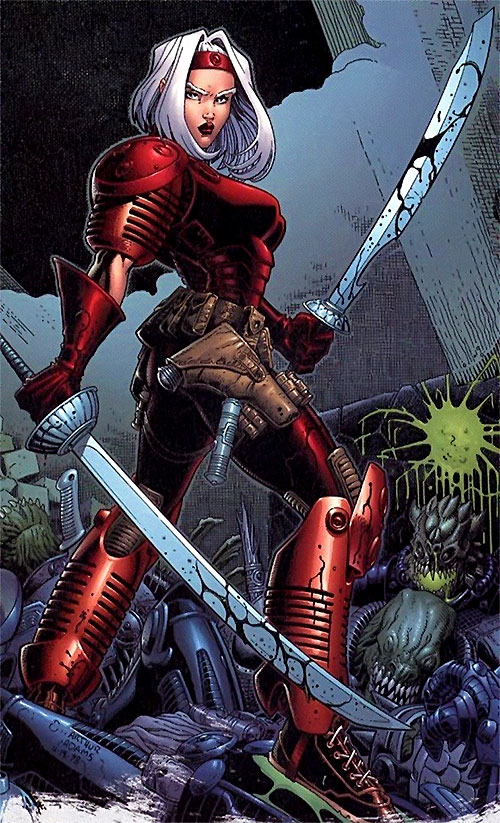 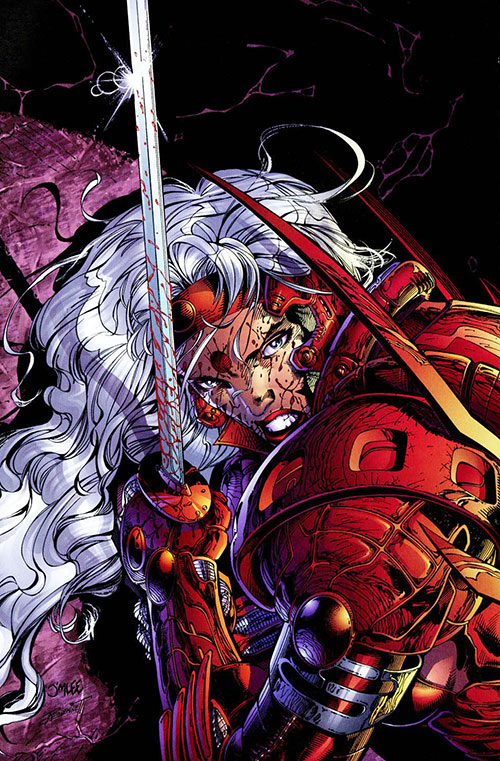 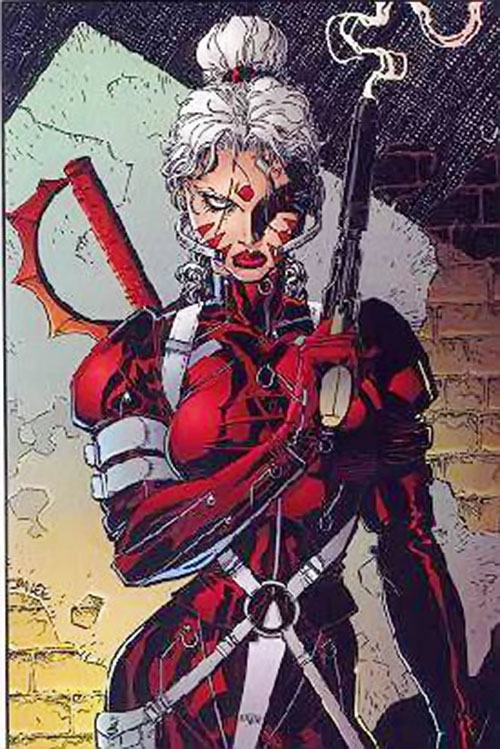 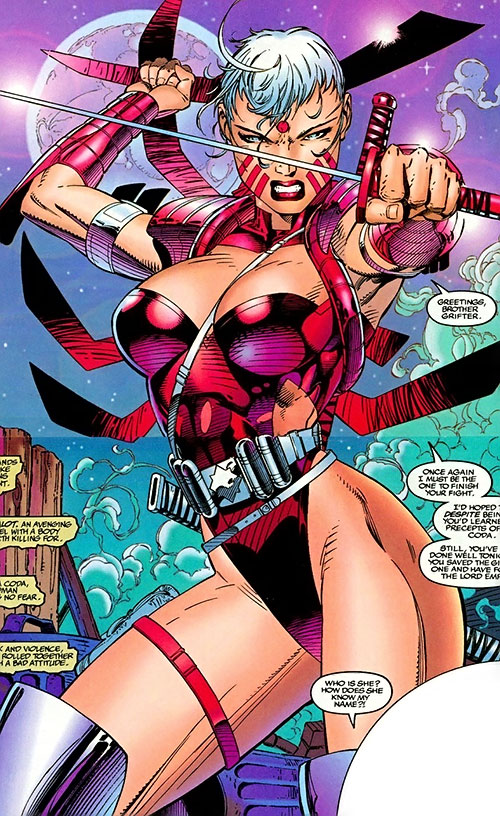