This obscure character has but one meaningful appearance. That was in 1987.

There’s barely enough material for a tiny profile. And that’s because stats are easy to infer.

It’s not indispensable, but for more context you can read :

Like his colleagues, Zebra-Man II seems to have at least basic field training. He also seems muscular and in excellent shape.

He has the power to attract or repel objects by gesturing in their direction. This seems psionicPsionics are sci-fi style psychic powers rather than, say, magnetic. He called them “lines of alternative force”.

Zebra-Man is usually drawn as having equine eyes. It is thus *possible* that his vision resembles that of a horse, albeit with front-facing eyes.

If you want him to have equine vision — which is flimsy — that includes : 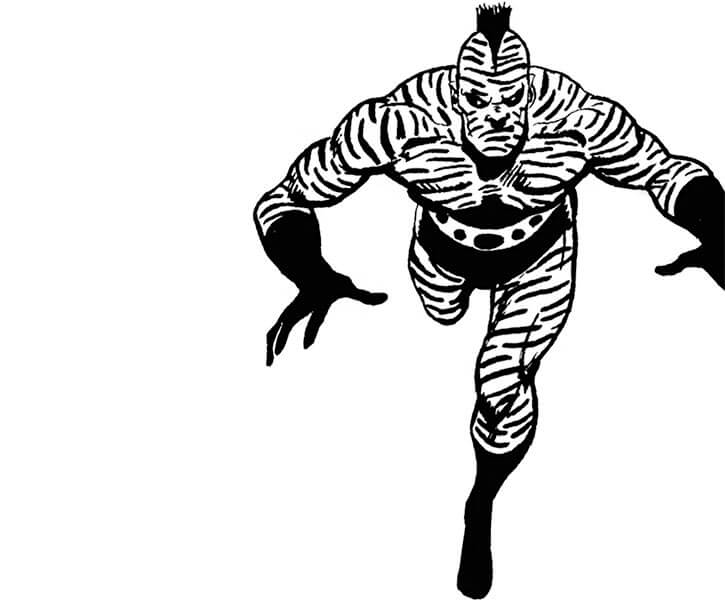 Like most of his teammates, Zebra-Man was patterned after a forgotten, early Silver AgeSuper-hero comics from the late 1950s to the early 1970s foe of the Batman. He resembled the original Zebra-Man.

It is possible that the first Zebra-Man’s charging machine was used to empower his successor. But the second Zebra-Man has inhuman features, which do not match how the machine functions.

Perhaps Zebra-Man II is a minor metahuman. Odd-looking and with negligible powers, but able to be “activated” to a greater level using the original Zebra-Man’s technology.

After the clash with the Outsiders, Zebra-Man II was only briefly glimpsed.

On some panels, it seems that he has four fingers per hand.

A devoted Kobra cultist. He seemed to be reasonably competent and collected.

Attraction/repulsion can have a 0 APs Area of Effect.

If you want to do the equine vision thing it’s a MPR, plus Ultra-vision: 02 (only to improve night vision), plus Attack Vulnerability (- 1CS OV/RV vs. bright lights).