Zed is a highly skilled assassin. His speciality is close combat, using an unusual style of capoeira. He was a good enough martial artist to threaten Red Robin (Tim Wayne) for a bit.

He also seemed to be a smart leader, and to be proficient at social engineering.

In 2008, Zed was part of the cadre of assassins who invaded Nanda Parbat. This attack was part of a plan to renew Ra’s al Ghul’s life.

Despite the intervention of Batman (Bruce Wayne), Nightwing (Dick Grayson), Robin (Tim Wayne) and Damian Wayne, the plan narrowly succeeded. However, Ra’s and his retinue were soon chased away by the goddess Rama Kushna.

During this encounter, Zed was but a faceless ninja. However, he was very impressed with seeing his venerated master being rejuvenated. His service and renewed enthusiasm apparently led to a promotion.

In 2009, Zed was the leader of a trio of League of Assassins operative, working with Owens (sniper) and Pru (close-range firearms). This team was sent to Paris to assassinate Red Robin.

However, their master Ra’s al Ghul knew that the attempt would fail. The real goal was to have Robin find a communicator so Ra and he could talk. But Zed and his team did manage to break contact, making the op more successful than expected.

Red Robin agreed to work with Ra’s. As a result, Zed and his team were sent back to help him. They supported him during a brief clash with the Wild Huntsman and German police. But he ordered them to scram due to their lethal methods.

Zed and his team were then dispatched to Iraq. Though Wayne didn’t want their help, they were instrumental in helping him navigate the US and local forces there. This allowed Tim to reach the cave where a time-lost Bruce Wayne had painted a Batman symbol, hundreds of thousands of years before.

However, a cadre of elite and/or metahuman assassins, the Council of Spiders, had been preying on League of Assassins operatives. One of them, the Widower, ambushed Zed’s team. Zed and Owens were killed before anybody could react.

Tim Wayne and Pru were grievously wounded. But they narrowly survived thanks to their training and emergency League of Assassins surgery.

Zed is a fanatic, who lives and dies at Ra’s al Ghul’s whim. He is emotionally invested in Ra’s welfare.

However, he’s also a smart and articulate bloke. He knows his job, he takes care of his team, he researches the targets and the terrain, etc.. Ra’s could entrust him with extremely sensitive information and complex assignments.

Doing something constructive — by working with Robin — rather than being a murderer intrigued and motivated Zed. 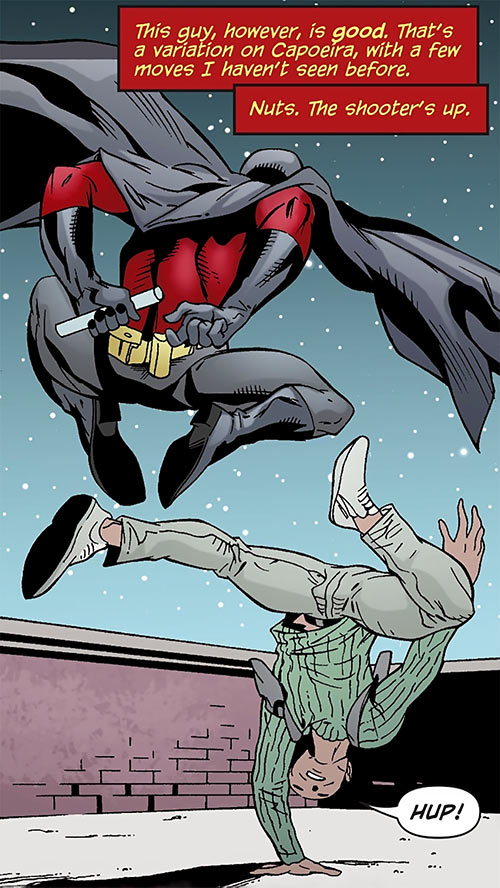