Zeek has immeasurable strength. He has proven himself to be the strongest human on the planet by performing incredible feats. Zeek is one of the few foes who have battered the Savage Dragon around with ease and into unconsciousness. He has torn the arms from Heracles and taken apart a team of gods without effort, in fact killing several gods with but one blows.

Zeek recently snapped the arm of Thor, who had just finished beating both Dragon and Mighty Man II. He defeated Bludgeon II, whose predecessor defeated the entire roster of Freak Force, the Deadly Duo and Vanguard! Apparently, Zeek has inherited most, if not all, of his father’s near limitless strength. And his father, Atlas, the god of strength, is mighty indeed.

In combat he prefers to batter his foes with his fists, hit them with objects or to wrestle them. He is also superhumanly tough and possesses great endurance and vitality. He is fast enough to strike opponents of superhuman speed (i.e. speedsters ).

His godly heritage has left him immortal and permanently slaying him is a very hard task to accomplish. His stature impresses mortals and gods alike.

His great weakness is his stupidity. He can easily be tricked if he can be made to listen.

Zeek appears to be the son of Atlas, the God of strength. He was first discovered when Dragon and Star II were hunting down the abducted Peter Klaptin. A group of criminals, who were previously arrested by the two heroes, had falsely believed that Klaptin was Star and had aided in their incarceration.

To help take out these heroes, the group had convinced the simple-minded Zeek that they had been harmed by the men and were in need of help. Zeek did what few others could do, beating Dragon unconscious without effort. It was only through the intervention of Officer Alex Wilde that Dragon was spared and the confused Zeek left.

When Dragon was recruiting for the Special Operations Strikeforce, he considered this strong man for membership but could not locate him. It was not until Dragon returned from a month long journey from Darkworld to Godworld that Zeek was hired for the team. Zeek joined with a number of other new recruits (Lightning, War Hawk and a few unnamed beings) and quickly became the backbone of the team.

Zeek proved himself to be the ultimate ally to have on your side. A group of powerful immortals, led by Heracles, abducted a number of godlings and demi-gods (including SOS members Radical and War Hawk). The God Squad cut through the full roster of the SOS until Zeek joined the fray.

Zeek killed three of the gods, critically injured two more and even tore the arms off of Heracles, a being stronger than most.

The phenomenon that is Zeek has also been the difference between victory and defeat on a number of other occasions. When the denizens of Godworld managed to raise Atlantis, destroying millions of innocent Atlantean lives, a band of heroes (Dragon, Mighty Man II, She-Dragon, Vanguard, Brute Force and the Deadly Duo) fell in a vain attempt to stop them.

The Gods’ leader Thor then tried to murder the Dragon and Mighty Man II. He defeated both in combat and looked set to succeed in his task. It was only the timely arrival of Zeek to simply break the arm of the villain that they survived.

Recently Zeek proved himself to be the strongest superhuman on Earth by defeating his only real rival, Bludgeon II, in a fairly quick and decisive battle. In the final battle with Dark Lord II and the Covenant of the Sword, Zeek finally met his apparent match while battling Dark Lord II.

He was shot through the heart with the immense optic beams of the villain, although to his credit he did last much longer than anyone else who had been struck by the energy blasts.

Zeek was also part of the “God War” event. That might have happened before the events that led up to his apparent demise at the hands of Dark Lord II even though “God War” was published later, in 2005. Yet other evidence points at this event instead being a later story; if so, then Zeek really is immortal and nigh-impossible to kill.

Regardless, he was at that point living in the city of Gods floating above Denver. Zeek seemed happy living with equal godly friends, at least until forced into action again during “God War”. Zeek was a member of the God Squad led by Heracles that formed after these events and that was dedicated to helping mankind.

Zeek is the biggest man you’ve ever seen. He’s a deformed monstrosity over nine feet tall of enormous muscles. Most men and even gods gape at his massiveness. He is a over-built hulk with muscles on his muscles. In particular, his upper body is overly muscular.

His face looks southern European with brown eyes and black hair. Completing the picture of strength is a broad, powerful chin, and a marked bone structure.

He is usually clad in a simple blue jumpsuit covering everything but his head and hands, along with a pair of white boots and a white belt. He usually hulks around employing his strength in various ways, and is very quick to action if he sees reasons for it (which he often does). Metal and concrete will fly around from the power of his take-off and landing.

Zeek has a child’s mentality. He speaks in simple sentences and refers to himself in the third person. He lives to find a home with friends and to live a relaxed life. Basically, he befriends anyone that says that they are his friends.

Usually docile, he doesn’t speak much and only utters simple sentences. He calls people according to their appearances, and most people will be called little something or another.

This is one dumb powerhouse that actually won’t care if others taunt him with him being stupid. But if somebody doubts his strength, he will show them real hard. Naturally, Zeek is extremely stubborn, and reasoning with him can be like reasoning with a stone wall.

Given the importance of friends, Zeek always seeks to protect them, whoever they might be at the time. If somebody is foolish enough to attack his friends he will smash/destroy/kill the opponents regardless of their size, gender, race or allegiance.

Although he can be persuaded into not killing people it is very hard to stop him if a foe has killed any of his friends. Splattering opponents into bloody pulps will not deter him from his “protective actions” in the least.

In a field of battle, Zeek will usually seek out the biggest opponent. He has no problems forgetting the past and become friends with old enemies. Friends will see him as a tremendous asset although he will turn on friends if they ’break the rules’.

Once he started living in the city of gods, floating above Denver, he accustomed to their rules of non-interference with humans and exile in the city. His “protection” would extend to the other gods, and he would try to prevent anyone from breaking either of these rules by attacking them. Clearly, Zeek is very much a follower and loves set structures.

Evidently, he does have a terrible temper and will get angry, very angry, fast. And angering Zeek is a very bad idea. When he is angry he acts with such savagery that he appears to fly headfirst into the foes to be pummelled, while screaming some sort of battle cry.

Zeek will get surprised and even angrier if an opponent manages to make him bleed. In this stage he will not hear any explanations or speeches. Eventually, when foes are defeated, and they will be, Zeek returns to calmness as fast as he went into rage.

Zeek is strongest one there is !

Zeek’s strength is really hard to estimate. He seems to be stronger than any other humanoid on Earth, and has proven capable of overpowering all other legendary powerhouses with ease. His upper limit has never been demonstrated.

His STR might be as low as 22 APs to complete most of his feats, such as defeating the Savage Dragon. But when facing gods, an army of superhumans or other legendary powerhouses with STR scores around 23-25 APs (such as Thor, Bludgeon II and possibly Mighty Man), his STR appears to be above this range. In fact it might go all the way up to 28 APs.

His given basic STR is averaged at 25 APs, but the GM is urged to use these alternative scores, ranging from 22 to 28 APs, depending on circumstances. The possibility exists that Zeek actually becomes stronger the angrier he gets, as it would be much in character. If so, some sort of progressing system should be used, starting from 22 APs of STR and then slowly rising.

Also, being a god, or at least a demi-god, Zeek might have access to Life Support advantages and the Sealed Systems and Systemic Antidote powers at 20 and 10 APs, respectively. 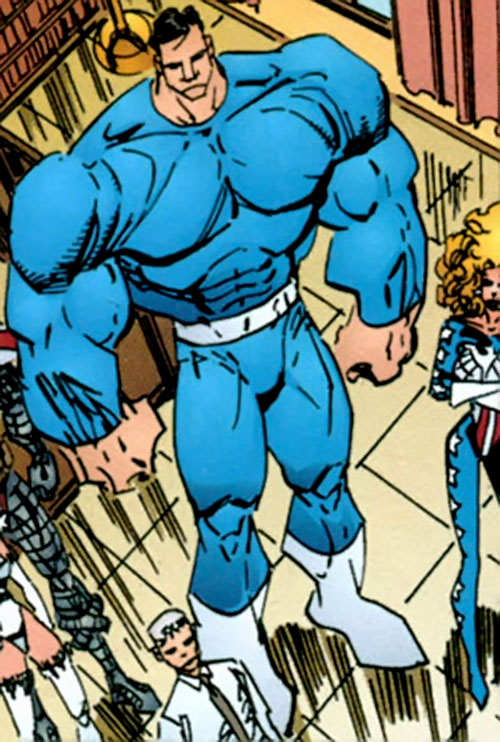 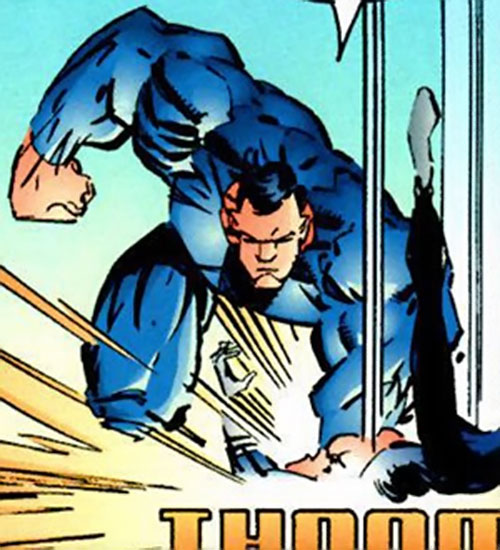 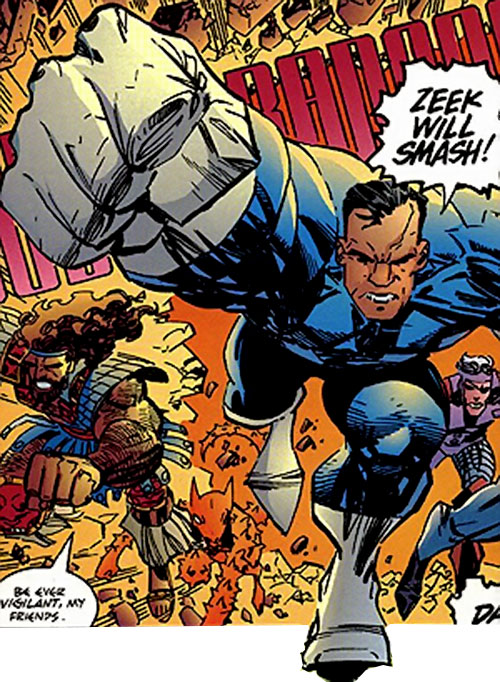 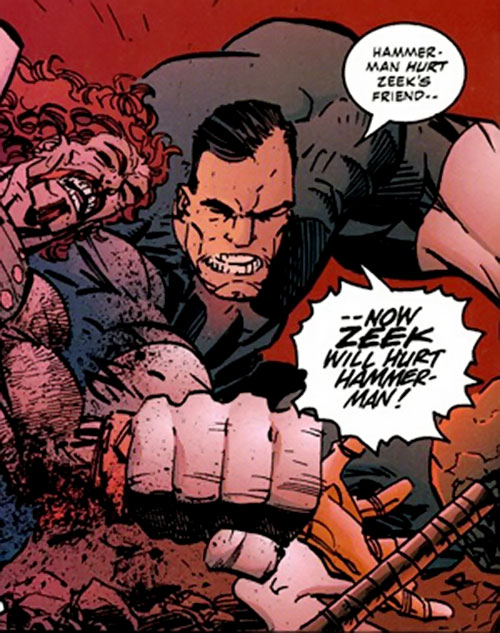