A Cosmic Enforcer, Zodac is a space traveler on the side of good. On rare occasions, he gave warnings or information unavailable to others.

As a member of the Cosmic Enforcers, Zodac observes all that happens in the cosmos. He has a special connection to Eternia and the happenings there.

The limits of his powers are not reached in his few appearances. He seems quite powerful. He can move objects with his mind and teleport objects through dimensions. In the DCU Preview comic which had He-Man save Superman from Skeletor, Zodac could fire energy bolts from his hands – but he never did that in the cartoons.

Though Zodac won’t intervene, he will assist with information and useful artifacts. He can be vague and terribly mysterious at the same time helping the heroes figure it out on their own.

His Cosmic Chair moves through space many times faster than light speed. This allows him to be where he needs to be in moments.

Zodac’s helmet and armor are common gear for the Enforcers. It has a thought projector allowing for the telepathic transfer of knowledge.

Zodac has been a member of The Cosmic Enforcers, Council of the Wise, and the Overlords of the Eternal Dimension. He is the only member ever seen or mentioned in the series. Little is known of them.

Their premise is to observe without interferring. They seem above mortal law, governing themselves. However, Zodac has stood in the role of judge.

The Cosmic Enforcers are well respected and trusted to go anywhere they want.

The Sorceress used telepathy to summon Zodac to Castle Grayskull. Zodac arrived in seconds. He was already aware of the situation. Skeletor had erased He-man’s memories. Then banished him to the crossroads of all universes.

Zodac gave Orko a wand to detect He-man. He then instructed them to use the Time Corridor. The heroes were deposited at the crossroads.

Orko, Ram-Man, and Cringer were successful in rescuing He-man and helping him remember who he is. They returned home and all went back to normal.

Zodac visited the Sorceress uninvited. The reason for his visit was a warning. The Star Seed, a piece of energy left over from the explosion that created the universe, rests at the heart of the planet Eternia. Whoever possessed it would have ultimate power. Skeletor had gained the knowledge of the Star Seed and was on his way to get it.

The heroes went into action. The Sorceress warned He-man of the tempting power of the Star Seed. He-man would have to resist or be corrupted to do evil.

He-man was victorious over Skeletor and captured the Star Seed first. He also overcame the terrible temptation of ultimate power. He-man brought the Star Seed to Zodac for safe keeping.

Zodac revealed he was the one who revealed the Star Seed’s location to Skeletor. The entire setup was a test of He-man’s virtue. The insinuation was if he hadn’t pass the test, Adam would no longer wield the power of He-man.

Trapped in the Phantom dimension , Zanthor, former guardian of the Golden Disks of Knowledge, used illusions to contact the Sorceress. He-man guessed someone was trying to get her attention. Thus, the Sorceress used a mirror to reveal Zanthor. 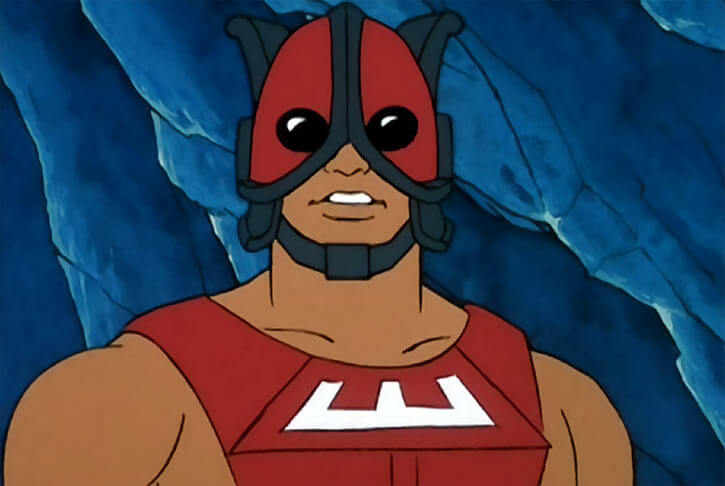 Zanthor had given the disks he was protecting to Skeletor for the promise of power. The Council of the Wise imprisoned him in the Phantom Dimension. Zodac was the only remaining member of the original council.

The Sorceress again summoned Zodac to Castle Grayskull. With the Council of the Wise disbanded, and a decision he helped make imprisoned Zanthor. Zodac would hear him out.

Zanthor, in his phantom form saw where Skeletor hid the disks. He asked to redeem himself by returning the disks to Zodac. He-man stopped any further disagreement by offering to accompany Zanthor and saying that everyone deserves a second chance. Zodac released Zanthor from the Phantom Dimension.

With He-man and Orko’s help, Zanthor was able to retrieve the disks. Skeletor tried a new trick. He promised to free Zanthor from the Phantom Dimension and help him get revenge on Zodac and those who put him there. Zanthor refused.

Zodac pardoned Zanthor of his crime. He then took it a step further, making Zanthor a Cosmic Enforcer. Zanthor would become Zodac’s assistant.

Zodac has a muscular athletic build with tanned skin.

He wears the red armor and helm denoting his office. Dark grey boots and barbarian shorts. His gloves are white.

He is continuously doing his job, riding about the universe at cosmic speeds. Zodac has few friends but he will take the time to visit the ones he has. Even at the rare Eternian Christmas celebration, Zodac can be seen mingling in the background.

Sorceress: “My thanks, Zodac for coming so quickly.”
Zodac: “With the fate of Eternia’s champion at stake, I could do no less.”
Orko: “Oh gee, mister Zodac, sir, could you really bring back He-man ?”
Zodac: “Though I observe all that happens in the cosmos, Orko, I cannot use my powers to change things.” 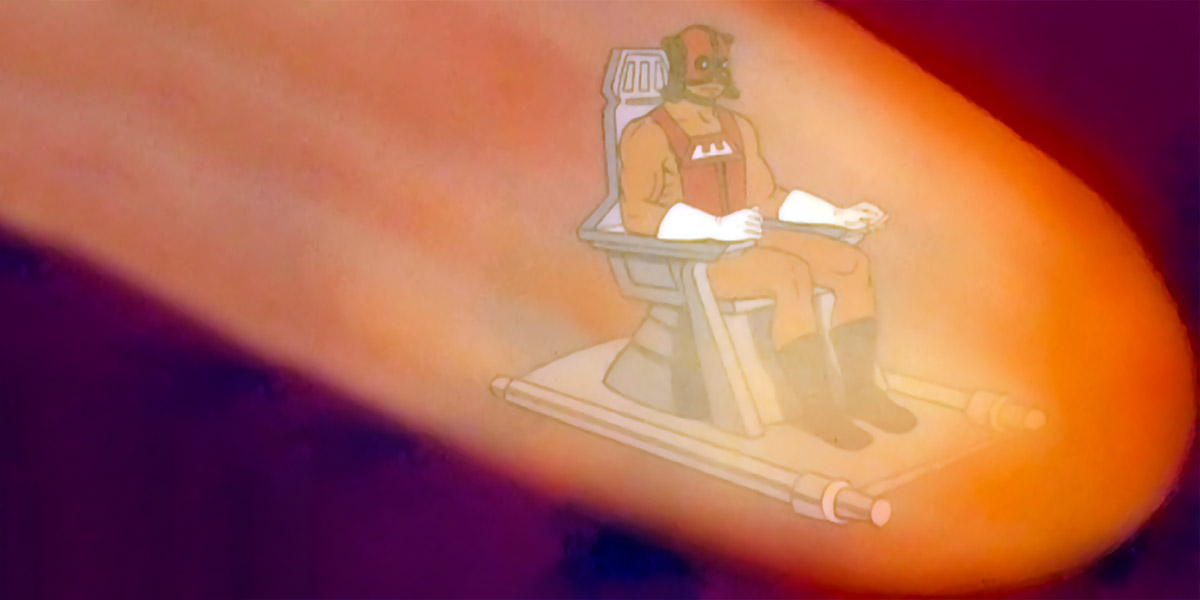 “Hurry my friends, I sense He-man is in great danger.”

“There’s beauty all around us, protect it, before it’s too late.”

Zodac: “He-man, you have succeeded admirably in your test.”
He-man: “Test ?”
Zodac: “Yes. You see, some time ago you were given great powers. So great in fact that from time to time it is necessary to test your virtue. That is why I myself allowed Skeletor to learn Star Seed’s location.”
Sorceress: “You did, but why ?”
Zodac: “Because by refusing to use the power of the Star Seed, even on one as evil as Skeletor, He-man has proved himself truly worthy of his powers. Remember that true goodness comes from knowing when not to use force. Farewell, noble He-man.”

Zanthor: “Zodac, I don’t know what to say.”
Zodac: “Say nothing. Our task is to watch and it’s time we got to it.”

Easy enough. Since the Cosmic Enforcers travel around and only observe, ahem, for the most part. Zodac would come to the heroes as a harbinger of future dangers.

“Rider of the Spaceways” always reminded me of the Silver Surfer. But I guess the observing thing is more similar to the Watchers.

I do wonder, though, how he would interact with the Guardians and the GLC. His chair always makes me think of Metron – wonder if their would be any connection… perhaps he’s a New God who was a student of Metron’s?

Connections:
The Sorceress of Grayskull (High).

Zodac took on an assistant named Zanthor to travel by his side throughout the universe. Zanthor used to be the guardian of the Disks of Knowledge but gave them to Skeletor for the promise of power.

Zanthor now travels at Zodac’s side as a Cosmic Enforcer.

Zodac only appears in three episodes so some stats are arbitrary.

Source of Character: The 1983/1984 animated series He-Man and the Masters of the Universe Episodes – “Quest for He-man”, “The Search”, and “Golden Disk of Knowledge”. Also the 1985 movie He-man and She-Ra: A Christmas Special (only a cameo). Voiced by Lou Scheimer. 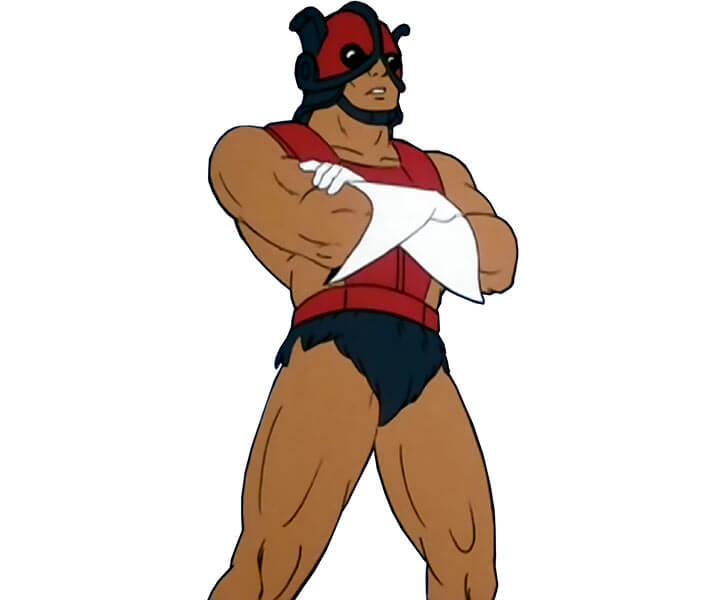 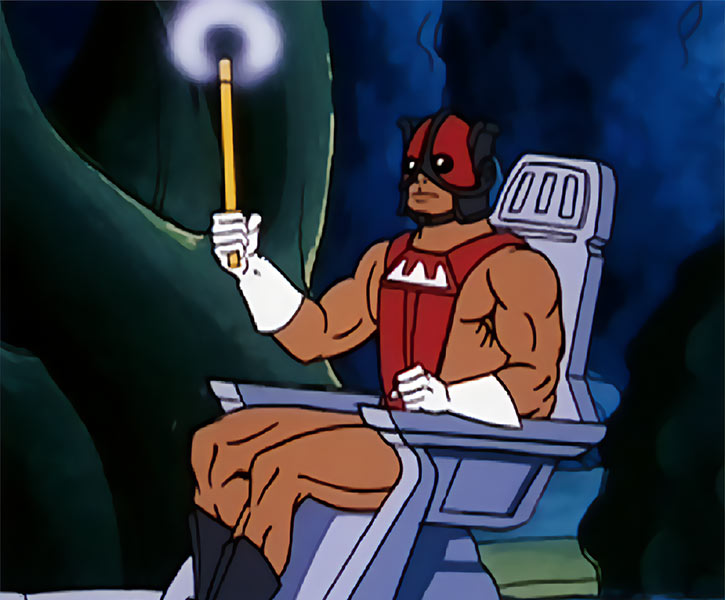 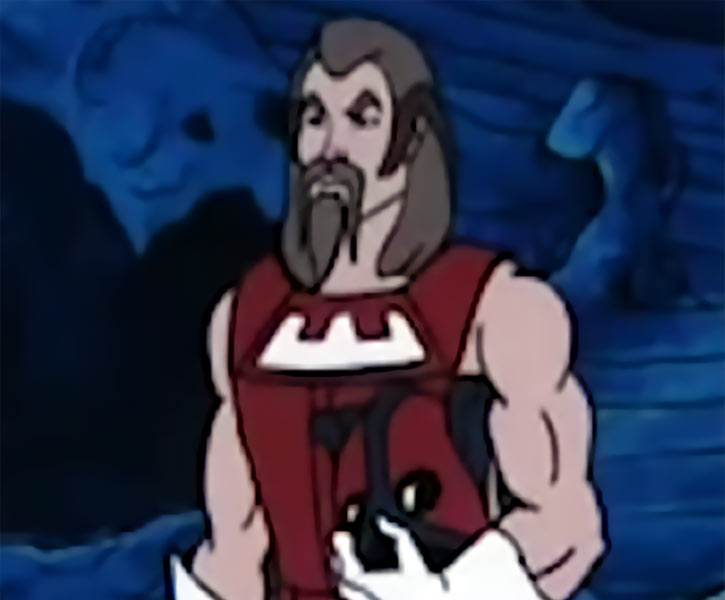