The necessary context can be found in the Shade, the Changing Man (Ditko era) character profile.

The full extent of its abilities are unrevealed. Deforming the buildings was used mainly for show, to cow people into submission.

One of the leaders of the Crime Council of Meta, Zokag was present in their citadel when it was raided by the security forces. Their escape was interrupted when the transmitting field teleporting them to safety was destroyed. This stranded them in the Zero-Zone. 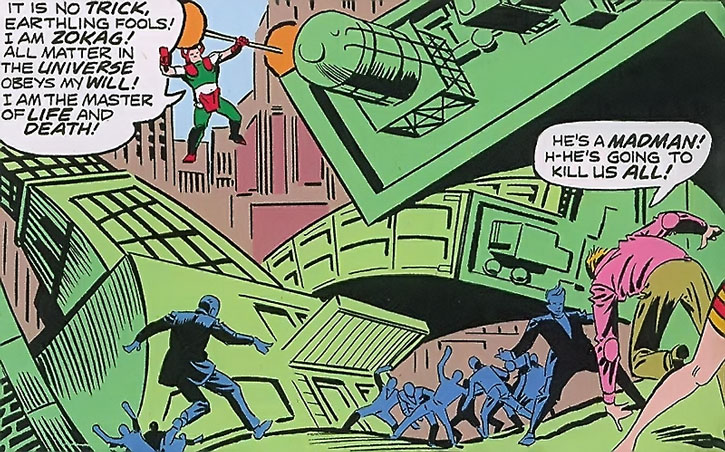 Using his Em-Rod, Zokag managed to reach Earth, where he decided to take over. After waiting for his Rod to recharge from breaking through the dimensional barriers, he put on a show of power, warping the tall buildings in the city.

This drew the attention of Rac Shade, a fugitive security officer from Meta, who opposed Zokag. They fought.

Zokag tried channelling the rod’s energies into Shade as they grappled for it. His force field holding off the energy for a few seconds, Shade kicked Zokag, creating a circuit that fed the energies back into Zokag, killing him.

Aggressive and domineering, Zokag uses displays of power to intimidate people, forcing them to do his bidding.

While maniacal, most of the quotes below were thoughts, rather than spoken out loud to himself. So he’s not completely gaga.

“All Earth will tremble before the savagery of Zokag the Demolisher.”

“Soon the puny Earthlings will prostrate themselves in awe before the power of Zokag !”

“Within moments this entire civilization of inferiors will be grovelling on its knees, begging for mercy from Zokag the all-powerful !”

“I am Zokag ! All matter in the universe obeys my will! I am the master of life and death !”