Zorr is a giant with some space gear. He’s extremely strong. Zorr can bring down six-story buildings with but a punch.

Zorr’s homeworld, Luphom, was ravaged by Galactus, presumably in the first half of the 1970s.

The only survivors of his race were those who, like Zorr, were not planetside when the Big G came. These were on the path to galactic conquest they had recently set off on.

Somehow, Zorr came to the conclusion that he could replenish the depleted energies of his world by conquering other worlds. he would destroy them by stealing their energies.

He surfaced in the Tranta Star System, where he discovered the planet Xandar. Zorr defeated the Nova Corps, the protectors of Xandar. Then his starship began to drain the planets geothermal energy.

He was driven off by the Centurion Nova-Prime, Rhomann Dey, but not without cost. Xandar tore itself apart, and Dey was badly injured.

Paralysed and dying Dey still managed to track Zorr to the next planet he attacked – Earth. Swearing to prevent this world’s destruction, he took two last actions.

The first was to transfer his powers to an Earthling, Richard Rider. Rider became the new Nova and would soon fight against Zorr in New York City.

The second somehow utterly consumed his body while the new Nova and Zorr fought. This gambit apparently destroying Zorr at last, as the Nova-Prime had sworn he would.

Years later, the space pirate Nebula attacked Nova, claiming that Zorr was her father. She had previously made similar claims about Thanos, but so far none has been verified.

A sort of, hmmm, space Hulk, really, in his general behaviour. He smashes puny worlds in the (probably mistaken) hope of restoring his own.

“Zorr will conquer ! Zorr will destroy ! And centurion Nova-Prime will die… forever !” 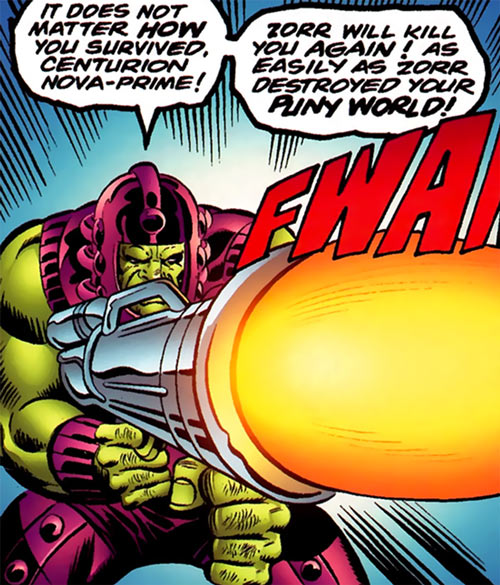