Zot has no real superhuman abilities. He’s just an energetic and fit kid with phenomenal reflexes.

He’s a good hand-to-hand fighter, a moderate acrobat, and an exceptional marksman.

Zach Paleozogt is a native of an alternate Earth. There, history ran very much like the pulp science-fiction of the 1930s and 1940s. In his world, it’s the mid-1960s, and high- tech peace and prosperity reign. Earth is part of an inter- stellar alliance of worlds, and war, crime, poverty and other social ills have been immensely reduced.

Orphaned at a young age, Zach was raised by his Uncle Max, an acclaimed and eccentric inventor, and Peabody, a dour robotic manservant. Zach was a bright kid who did well in school and absorbed his uncle’s bright outlook on life.

But what he truly excelled in was the physical. Sports, gymnastics, and his world’s popular interactive arcade games. These skills came in handy one day, when he used them to save a park full of people from a crashing aircar.

I shall be that hero!

Basking in the media attention this incident brought him, Zach convinced Max to outfit him with various gadgets and a costume. He then took to the skies as the superheroic Zot!

As the years went by, Zot! gained a great deal of fame and public trust by helping people in trouble. He also defeated a bewildering array of bizarre criminals, including the mad cyborg ’artist‘ Dekko, the electric assassin 9-Jack-9, and the alien crimeboss called The Blotch.

Recently, Zot! became involved in a civil war on his parents’ homeworld of Sirius IV. In the course of things, he was forced to travel through a dimensional  gateway invented by Max. Zot! thus ended up on our own quiet, mundane Earth. Here he met an ordinary girl named Jenny Weaver, who got swept up into his world and adventures.

The two have been close friends and inseparable companions since then, regularly shuttling between their two dimensions.

Zot is a good-looking teenager with a trim build, blond hair, and an almost perpetual smile.

His ’hero’ outfit is a red bodysuit with blue trunks, a white belt, and metallic white boots and bracers. The belt has a round blue buckle with a yellow five- pointed star on it, and his chest sports a stylized yellow lightning bolt symbol.

To quote Jenny’s friend Terry: “He’s just so goddamn *cheerful* all the time!” Zot is an indefatigable optimist, maintaining a sunny outlook and an abiding faith in the innate goodness of people even in the direst situations.

He’s always kind, earnest, and truthful, and projects very much that sort of ’boy scout‘ air that most folks associate with Superman.

He *is* still a kid, however, and is sometimes given to a little egotism and impulsiveness.

“Doctor Bellows, I just want you to know that you may be a rotten human being, but you make a great bad guy.”

Since Zot! lives in his own little well-developed dimension, it would be extremely easy to have him pop through Max’s gateway into most any setting. Can you say Hy-per-time ? I knew you could. 🙂

It would kinda defeat the purpose of McCloud’s stories to make Jenny’s world the mainstream DCU, though…

These handy widgets were designed for Zot! by his Uncle Max, and have proven extremely useful. 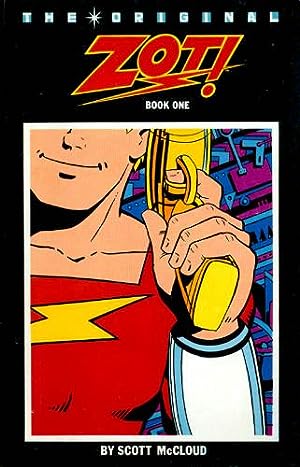