The strange alien life form Zymyr first appeared in 1984. He became another notable mentalist in the Legion of Super-Heroes continuities, with mega-scale teleportation powers.

Incidentally, we have no idea of what would be the appropriate pronoun for Zymyr. really it’s much simpler with Humans, where you just have to ask…

Zymyr is a Gil’dishpan, an aquatic alien who breathes a methane atmosphere. The Gil’dishpan all developed the ability to communicate mentally, useful in a liquid atmosphere (Telepathy, in DC Heroes RPG terms). Zymyr can also Mind Probe his opponents to learn their secrets.

Zymyr possesses an additional talent which seems to be unique among his kind. This is the ability to create Warps which can easily span interstellar distances. With the proper equipment and assistance, he was able to teleport an entire planet across dimensions .

His protective bubble allows him to survive in any environment, including outer space.

Zymyr has an inquisitive mind (not overly burdened by morality) and is skilled in Gil’dishpan sciences (Gadgetry, Scientist, Genius, Scholar). He is served by cyborg warriors.

Zymyr was exiled from his people for performing illegal experiments on other sentient beings. He set up a private laboratory world of his own, and eventually met up with Nemesis Kid of the Legion of Super-Villains.

Nemesis Kid and Zymyr got the idea of combining Zymyr’s science and the Kid’s alchemy to teleport the planet Orando to another dimension. Once there, they could each pursue their interests without moralistic interference by “lesser beings”.

When the Legion of Super-Heroes thwarted this plan, Zymyr abandoned his human allies. He warped back to his own world, accidentally teleporting Lightning Lord and Lightning Lass with him. He probed their minds to learn the origin of their powers, and found them so intriguing that he planned to experiment on them.

But the pair broke free. They caused so much disruption to his operations, he teleported them home to Winath to end their interference. 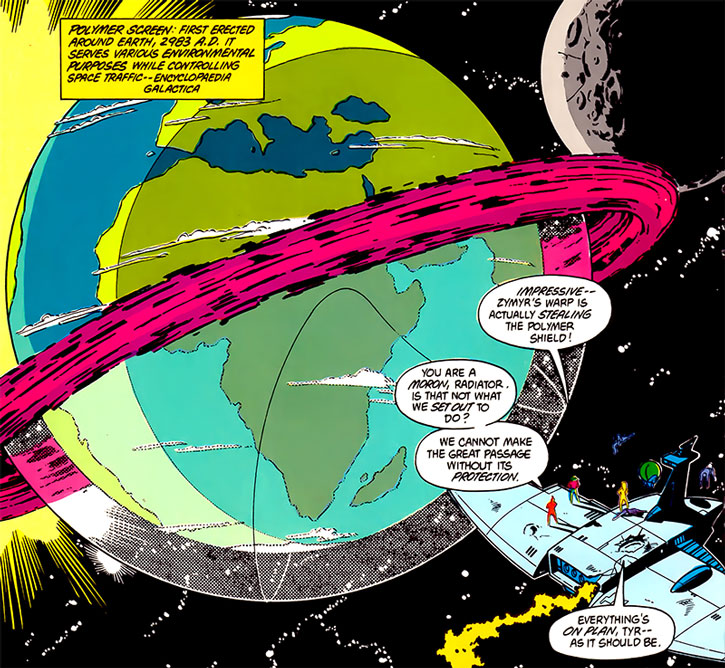 A year later, in 2986, Zymyr allied himself with Universo. He helped Universo to defeat and control Wildfire, the White Witch, Tellus and Quislet, in exchange for experimental subjects from several species.

Universo was defeated before he could uphold his end of the bargain. Zymyr vanished, presumably returning to his world, located beyond the borders of the United Planets.

The Gil’dishpan are, to human eyes, large gray hybrids of worms and sea-slugs. He has one limb, kind of a stalk with no visible manipulatory appendages. As Seb would say, see peekchurs for details.

Zymyr is arrogant and brilliant. He’s not innately bloodthirsty, but he views non-Gil’dishpan as lesser beings, basically animals, who have no rights and are interesting experimental subjects.

He doesn’t typically try to kill opponents because they might be useful subjects later on. For that reason, Zymyr found himself disenchanted with the excitableness and irrationalities of many of the LSVers, and would be unlikely to ally with them again.

His alliance with Universo was more natural. Universo shares his arrogance and his desire to use and control, rather than destroy.

Note that Zymyr is quite likely to warp away from a fight if he finds the level of opposition to be annoyingly high. ”Annoyed” is about as upset as he generally gets, as it’s easy for him to warp an opponent away or to vanish himself before things get really out of hand.

Zymyr’s telepathed communications are in a strange idiom. That includes sometimes referring to himself in the third person, sometimes in the first, as seen in his quotes.

“Waiting no longer we must be. Freeing ourselves must begin !”

“Traveling with me to my own sanctuary, they dared ? Being finished with Legionnaires, Zymyr wished to be…shall be ! Disposing of humans, please… quickly !” 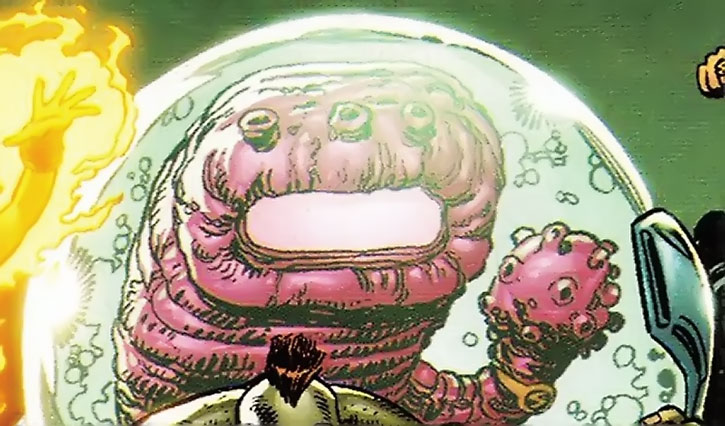 “Feeling tired of this madness, Zymyr is ! Warping away shall I be !”

“Frightening children you may be, White Witch, Zymyr not. Warping you elsewhere Zymyr shall be, waiting not for your angered spell.”

“Gaining wisdom have been I, Legionnaires – and taking wiser allies. Learning more of that shall you be the difficult way. Wishing you had not, perhaps, asked, as well.”

Nothing special is really needed to insert him in a post-Zero Hour universe. But as of this writing he hasn’t appeared since the mid-to-late 80s.

He and Hywyndr the elemental demonstrate that there are some mutations among the Gil’dishpan, so you could put together a whole team of worms if you want. You could use them in Invasion! if you don’t use a 30th century setting.

Equipment:
PROTECTIVE BUBBLE [/DEX/ 03 /BODY/ 17, Flight: 05, Sealed Systems: 18, R#00. Zymyr travels in this bubble, which is filled with the watery methane fluids he needs to breathe. He pilots it using his Vehicles skill, though it doesn’t seem to need any physical manipulation of controls, presumably operating cybernetically]

The first time Zymyr faced the LSH, his protective bubble only had /BODY/ 09. Getting knocked around by some Legionnaires convinced him to upgrade.

Bonuses and Limitations:
Self-Linked Gadgetry is Always On, because by the way, though called cyborgs, these are actually robots. 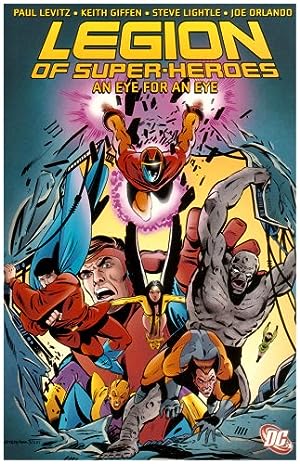 Legion of Super-Heroes: An Eye for an Eye 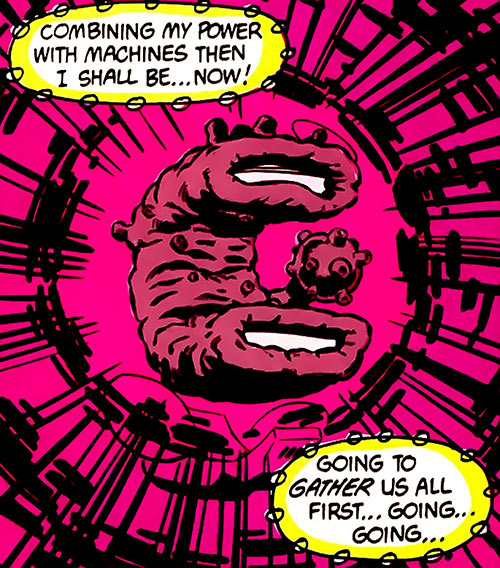 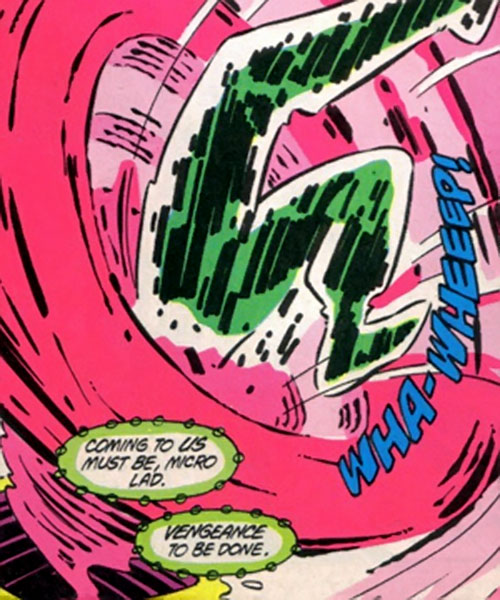 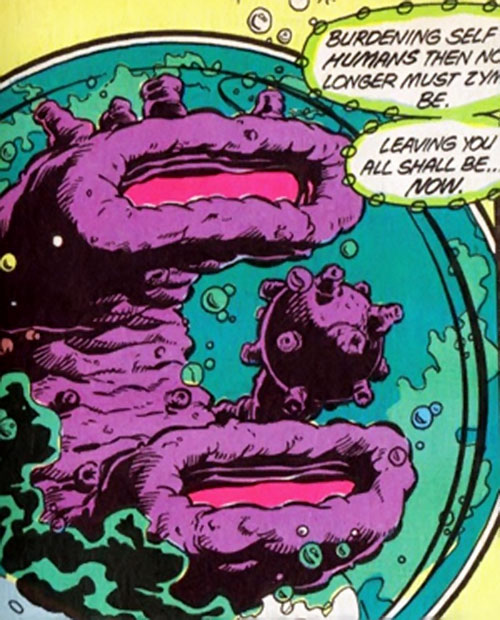