As a being of pure electricity, Zzzax can absorb and discharge vastly powerful currents of electricity, manipulate nearby electrical fields, and fly. The creature’s size and strength level also increases in relation to the amount of electricity absorbed.

This control of electrical current also extends to the human nervous system. Thus, Zzzax has been shown to be capable of controlling even the Hulk. Zzzax is also dependent upon electricity from the human brain to survive, and when killing a prey it will temporarily take on the personality traits of the victim.

In more recent times, Zzzax has been shown as being capable of generating intense heat, to the point whereby water – a previous weakness – evaporates before touching it.

As another recent addition, it was shown capable of inhabiting and controlling the S.H.I.E.L.D. Helicarrier.

Zzzax is a semi-sentient electromagnetic construct of psionic energy resembling lightning. It is normally larger than any human being and can by absorbing energy grow to its full size of 40 feet. 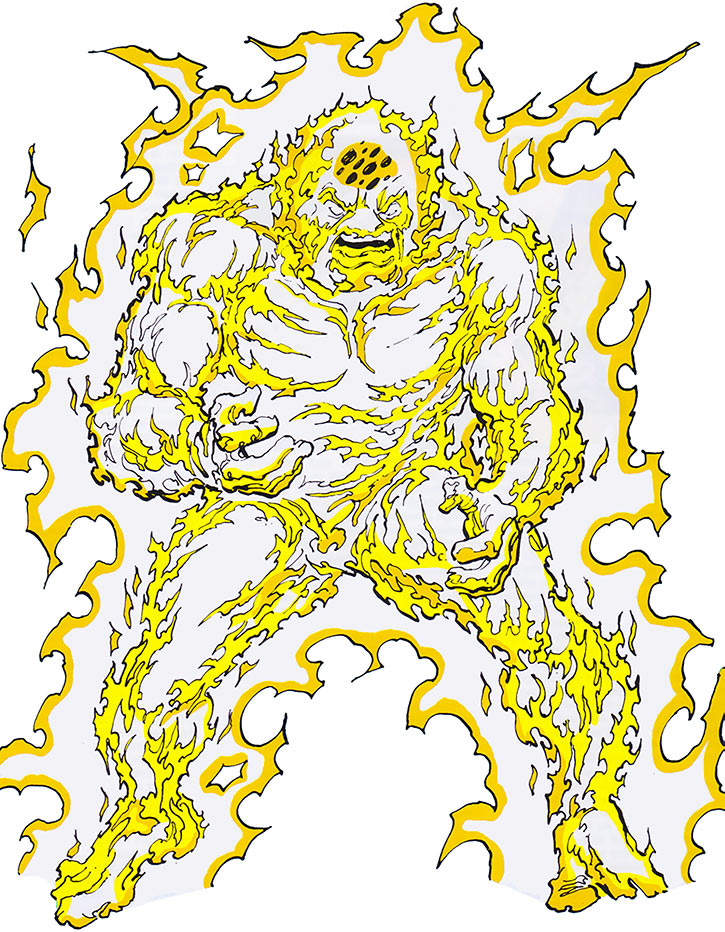 Zzzax is mostly a mindless monster. It is not particularly intelligent, but driven by a strong sense of self-preservation and will absorb as much energy as possible to prevent its death. It seems particularly interested in absorbing the electrical energy in the human brain since it acquires some degree of sentience by doing so.

This will allow him to speak out his survival instincts and intentions. Zzzax’s mental attacks invariably result in painful deaths for those bystanders unfortunate enough to get in its way, making Zzzax a remorseless mass murderer.

A connection between Zzzax to Black Lightning or Rampage seems possible and likely.

Zzzax might be the forefather of the Korballian Lighting Monsters of the Legion of Super-Heroes era. Perhaps Zzzax himself will show up to a Ranzz family reunion for a battle royal – lighting bolts abide!

Advantages:
Lightning Reflexes (he he).

Drawbacks:
Serious Rage, Strange Appearance, Fatal Vulnerability (Zzzax’s energy is constantly dissipating and it always loses Body at the normal rate of a Fatal Vulnerability), Fatal Vulnerability (If Zzzax somehow becomes grounded its electric field dissipates, it disappears and its Body becomes 0 AP’s. It can thereafter only resurface at a electrical power source of at least 14 AP’s; water did also have a similar effect on Zzzax earlier, but he it since lost that weakness).

Absorbed RAPs (from Energy Absorption) are used to boost his size (Power Reserve (1) to Growth) and to heal him (recover BODY APs). Although electricity makes it stronger it is also somewhat vulnerable to electricity-based attacks, being completely solid against such attacks. Grounding it and thus dissipating its electric field, will completely destroy it.

Furthermore, Zzzax can move and fly at the speed of lightning (half APs of SL:Lightning), and can also travel through electrical power lines (Teleportation). Touching Zzzax will be severely damaging (combined attack from SL:Lighting and Flame Being).

Its ability to absorb energy is so great that it can also absorb mental energy from a victim (Mind Drain) and temporarily make itself smarter (Power Reserve (2) to Mental and Mystical Stats, steal Skills).

Zzzax can also choose to attempt to override a victim’s synapses, thus taking over control of the victim’s body (Personality Transference), but this attempt also leaves him susceptible to the victim instead attempting to gain control over Zzzax’s body.